Sweeny Todd at The Theatre on the Bay, Camps Bay, Cape Town RSA


Sweeny Todd at The Theatre on the Bay, Camps Bay, Cape Town RSA

On Friday 11th of March last I attended an edgy, gripping performance of “Sweeny Todd” at The Theatre on the Bay, at Camps Bay, Cape Town, RSA. Music and lyrics by Stephen Sondheim, Produced by Pieter. Directed by Steven Stead, Set Designed by Greg King of the award-winning ‘KickstArt team. Costume Design by Neil Stuart Harris, Lighting Design by Tina Le Roux, Hair & Wigs by Jan and Mik'hail of Headmasters 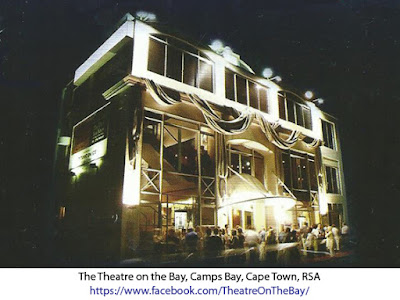 This edgy, unsettling musical, melodrama is set in a visually pleasing and satisfying yet technically complex stage set exuding the hidden stage craft skills and experience of the scenographer Greg King. Anticipation stirs as the house lights darken and the characters emerge through the brightening misty gloom, revealing a small, theatrical presentation/performance space with a backing shadow screen through which the demonic, deranged and threatening Sweeney Todd slashes his entrance.

A magical production with mesmerising performances by an all South African cast led by Jonathan Roxmouth as Sweeney Todd and Charon Williams-Ross as Mrs Lovett. Running at Theatre on the Bay, Camps Bay, Cape Town till Saturday April 9th 2016

The timely lit performance areas within the space and the smooth queuing of the performers bring the audience effortlessly from setting to setting and from time to time.

The first floor “Barbers Shop” performance area doubles as a roof top with the ceiling roof piece over the Barbers Shop folding down over the barber shop’s props and dressings and becoming a sky-light on a roof top.
Through the deftly re-setting of props, dressings and cast, augmented with nifty lighting by Lighting Designer Tina Le Roux, the ground floor, centre stage “Mrs Lovett’s Pie Shop” changes from interior to exterior to street area.

A very satisfying design solution not only visually pleasing to the eye but it also charges the emotions of fear and dread. The engineering of this complex set is unobtrusive, it works smoothly and enables and enhances the energetic performance of the cast and is very sympathetic to the ambiance of the drama.

The backing of black drapes and partially lit back scenic elements of the upstage gave a subdued warm, menace to the space. This restrained lighting effect assisted in keeping the observer’s attention on the performers. 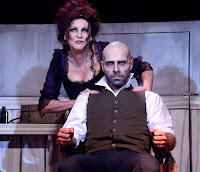 Neil Stuart Harris’s Costume Design was effective in giving the period/fantasy characters an imaginative, enhanced credibility and an appearance or sense of being in a deprived, foggy Dickensian London borough. 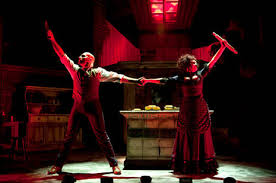 Tina Le Roux’s Lighting Design was subtle and sensitive in conveying changes of location, time and bringing emphasis to dramatic moments.
When appropriate it added to the sense of danger, menace and horror to the, at times, dramatically claustrophobic setting in which this period fantasy, edgy, unsettling musical drama unfolds.

The programme was good value at ZAR 30 (€1.70) apart from information on Theatre on the Bay, Pieter Toerien Productions, biographies on the all South African cast and crew it contained some nice production photos

Theatre on The Bay:   https://www.facebook.com/TheatreOnTheBay/