The Judas Kiss at the Gaiety Theatre.

A memorable visit to the Gaiety Theatre in Dublin on Thursday evening last (18th October 2012) to see the, Robert Fox, Chichester Festival Theatre and Theatre Royal Bath Productions presentation of  The Hampstead Theatre Production of “The Judas Kiss” written by David Hare and directed by Neil Armfield.
The set for the production is designed by scenographer Dale Ferguson, costumes designed by Sue Blane, lighting design by Rick Fisher and sound design is by Paul Groothuis.


Act I is set in a London hotel room as Oscar arrives from the court and forgoing the option to run, awaits the arrival of the police to arrest him. The setting is large and dark with a sense of Victorian opulence. This is achieved by setting the corner-set diagonally to the auditorium with a jogged run of high black flats on stage right and a great, broad swag of black crushed velvet draped as a canopy over a large, splendid brass bed with black enamelled posts. The velvet drape forms the wall behind the bed and seams to pour across the floor filling all of the acting space down to the apron of the stage. The jogged panels of the black wall accommodate a large wall clock with a wall mounted oil lamp either side, and upstage panel has a narrow vertical window ope, allowing sun light in and the occupants of the room a view onto the street below. There is long, dark, leather upholstered, button back couch under the wall clock and two, black velvet draped occasional tables, set against the wall, one under each of the oil lamps. Centre stage is occupied by a large carved wooden framed chair with leather upholstered seat and studded back panel with a wine table beside it. There is a square top restaurant table set to stage left with a serving trolley and a single chair. The entrances and exits are made down stage left and right between the ends of the set and the tormentor flats. 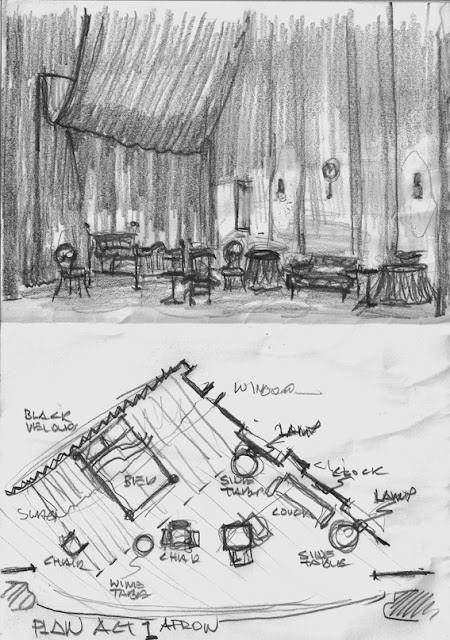 Act II is set some years later in Naples, Wilde is down in mood and financially broke, and while Bose is having a good time he is preparing his departure strategy and abandonment of Oscar.

The Act II setting is again large, and while following the same setting lines as in Act I, in this act it is bright and has a sense of Mediterranean lightness. This is achieved by presenting the corner-set diagonally to the auditorium with the jogged run of high black flats on stage right rearranged to give an upstage opening with the window flat now set stage left of the opening. A bright shaft of Mediterranean sunlight comes through the window ope, adding to the sense of the location and the time of day.
Whereas in Act I a great, broad swag of black crushed velvet draped as a canopy over a large, brass bed; In Act II there is a large white gauze draped high over a basic iron bed. It forms the wall behind the bed and seams to pour down onto the floor.
The set was supportive of the play, giving an appropriately styled setting for the performers without distracting from the performance but with enough visual cues to stimulate the imagination of the audience into visualising the rest.
My pencil illustrations show my interpretation of the stage plan for Acts I and II, and an impression of the elevated view. 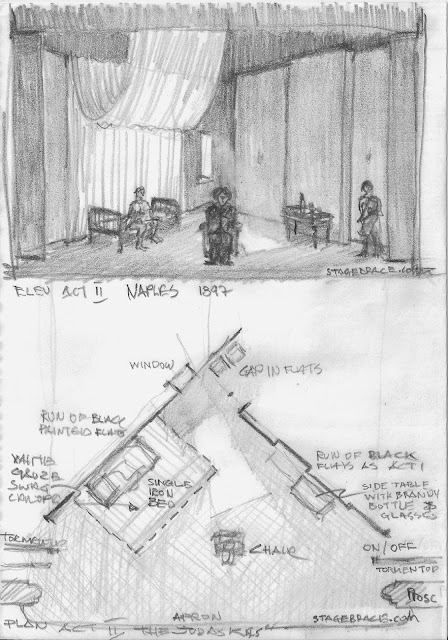 Talk of the Town at the Project Theatre

This vibrant production by Landmark Productions in collaboration with Hatch Theatre Company is well worth making every effort to see and experience this theatrical presentation.


Emma Donoghue’s script is set in Ranelagh, Dublin 1927 and in New York during the period 1949 to 1960s. The Scenographer cleverly and satisfactorily accommodates all the performance areas in one multiplex set. The Ranelagh, Dublin 1927 set is upstage centre, softened and visually isolated by partial screens. The New York performance areas are downstage centre, left and right, with receding depth achieved for the New York scenes by access corridor effects set into the scenery on stage left and right of the upstage centre Dublin set.


The main character Maeve Brennan an Irish immigrant living in New York and writing for the “The New Yorker” magazine, has reflective moments of childhood in Ireland, catching memories, some disturbing for her “Irish Stories”. These memory scenes are played out in the Ranelagh setting centre back by a composite family of Mother, Father and Daughter (young girl). The action in these scenes is presented as a manifestation of what is in Maeve Brennan’s mind’s eye, with Maeve Brennan down stage right or centre thinking, writing or imagining in her New York apartment.  The subtleness and the haunting effect is effectively lit by lighting designer Natasha Chivers. The New York settings of Paul O’ Mahony’s concept have a bigness about them that says enough for the audience fill in the canvas of their mind. O’Mahony’s set and Chiver’s lighting allow the smartness and sharpness of costume designer Peter O’Brien’s Manhattan costumes to not only support the characters, personalities, gender, occupation and social economic standing but to support the sense of time and place of the story. The importance of hair and make-up in establishing the character’s personality, composure, presence and the time and place of the scene can be seen in the hair and make-up work of make-up designer Sharon Ennis.


For students of design for stage and screen attending the show, who can tear their attention away from the gripping performances and give attention to how the designers establish not only the visual style but how their work says so much about the characters being performed.


The production was supported by the Irish Theatre Trust. http://www.dublintheatrefestival.com/friends/irish-theatre-trust.asp

The Last Summer by Declan Hughes at The Gate Theatre, Dublin

An interesting and engaging piece of new writing by Declan Hughes set in Glenageary - Dalkey during 1977 and thirty years later, 2007.  Toby Frow’s interpretation and direction of the production was engaging and entertaining. The opening light change and low musical introduction prepared the receptive minds of the audience for transportation into the opening act. The performance area was framed by black wing flats and a black false proscenium.


The set, a satisfactory manifestation of the Scenographer, Robert Innes Hopkins collaboration with the Director, Lighting Designer and cast; gives the cast, the production team and the audience a very satisfactory design concept to work with.


The story is set over two days in August 1977 and two days thirty years later August 2007. Needless to say there are two versions of the characters the teenagers of 1977 and the adults of 2007. Both groups appropriately and ably dressed in the style of the period by Costume designer Joan O’Cleary.


The rotation of the set by the younger or older characters (depending on which time the scene is set in) when accompanied by Lighting designer, Paul Keogan’s subtle, atmospheric light changes and Sound Designer Richard Hammarton’s soundscapes bestows a “Time Machine” quality to the set.


The rotating central set pieces of a garden wall (both front and back) with no gate in the opening, all mounted on an irregular shaped trucked polygon rostrum, rotated smoothly about a hidden central pivot on the deck of the stage. The arching garden/kerb side branches and the “perspective diminishing” street lights set against a dark background behind the acting area focused the audience’s attention on the performance area.


This set works and works well both as a very versatile, appropriate and visually satisfying environment supporting the script the director and the performers’ interpretation. 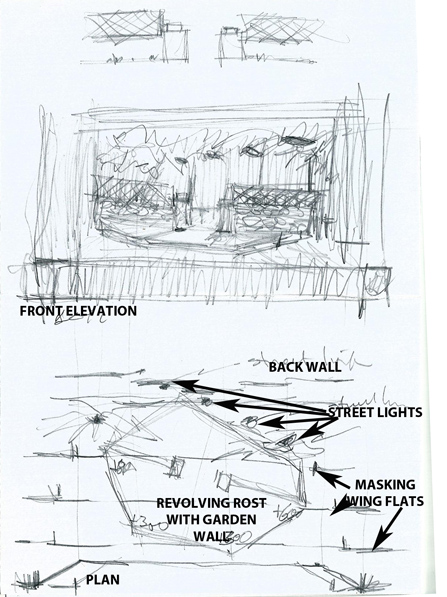 The work of Costume Designer Joan O’Cleary maps the characters and their roles into the two periods and the location in which the play is set. It is challenging to design for plays set in the recent or not too distant past. Although there is plenty of visual reference for the period, the challenge is to dress the performers appropriately to their character, the time, place, socioeconomic position and in doing so not to be caught out in choosing the historically correct item which looks visually incorrect. That is, unless some such item is required by the script.


Through her Costume Designs, Joan establishes the characters in the style of each period, their age, their gender, their socio-economic standing, occupation and their demographic and again her work contributes hugely to establishing the where and when of this play.


The resetting of the furniture, dressing props and hand props by the cast between the acts was well done and maintained the theatrical illusion.