2014 Irish Times Irish Theatre Awards: And the nominees are...

The nominations for this year’s The Irish Times Irish Theatre Awards have been announced, which recognise the best performances and productions in Irish theatre in 2014. 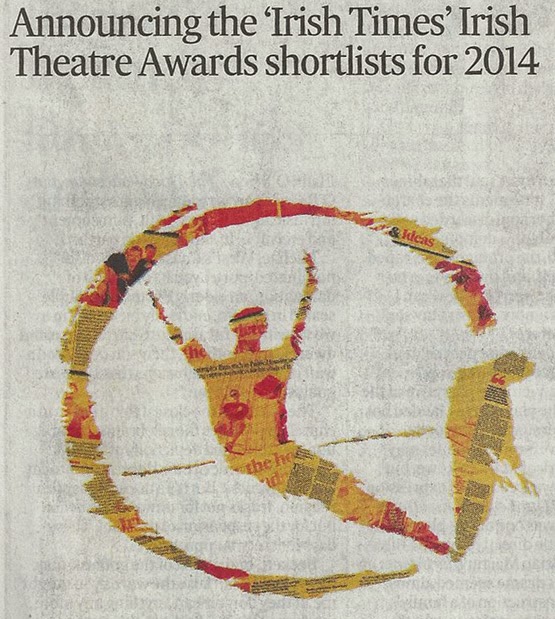 Shortlists have been announced across 13 categories. Among the most nominated productions are: Landmark’s Ballyturk, by Enda Walsh; the Abbey Theatre’s Our Few and Evil Days, by Mark O’Rowe; and the Lyric Theatre’s Punk Rock, by Simon Stephens. Each has been nominated for six awards. Among the actors nominated are Cillian Murphy, Aoife Duffin, Marie Mullen, Ciaran Hinds and Aisling O’Sullivan.
The three judges for 2014 were: Gerry Smyth, poet and former managing editor of The Irish Times; novelist Liz Nugent; and actor Fergus Cronin. Between them they saw 138 productions in conventional theatres, site-specific locations, promenade performances and even floating venues throughout the country.
See Peter Crawley's article in the Irish Times Weekend Review section, Saturday 17th January 2015: Click on: http://www.irishtimes.com/culture/stage/backstage-at-the-irish-times-irish-theatre-awards-1.2068843
Posted by stagebrace.com at 08:14 No comments:

Thousands of years ago people made up stories to explain the world. Myths describing the changing seasons often became dogma, morphing into religion. Fact, theory and story slid around one another, shaping an idea of what the world was, how it worked and what the meaning of life was.
More recently science nudged those belief systems aside – unless you happen to be a creationist – and enjoyed a brief interlude when everything seemed measurable, discoverable and explainable.
But it isn’t. The paradox is that the more we can observe, the more we discover that the sums don’t add up. Concepts such as dark matter, which can’t be seen or measured, have to be added to calculations to make them work.
These days string theory and quantum physics seem to occupy a similar space to the old myths. It does appear, at least to the amateur, that these branches of science offer stories that make sense of what can be seen but not (yet) proved.
Some of these ideas are almost romantically delicious. Take entanglement. Once derided by Einstein as “spooky action at a distance”, entanglement demonstrates how some particles are so deeply linked that observing one has an effect on the other, even though they may be separated widely. Imagine if that fact could form part of an explanation for some of our more inexplicable emotional reactions – including love.
On a perhaps more practical level, there’s the work of Benoit Mandelbrot, the Polish-born French mathematician who saw how fractal geometry creates the structure underpinning what may otherwise seem like chaos, and that even clouds and coastlines have an underlying degree of order. Arthur C Clarke, the science writer and author of2001: A Space Odyssey, described the pretty patterns of fractals, generated by the Mandelbrot set, as “one of the most astonishing discoveries in the entire history of mathematics”.
With that, science and art, which in Leonardo da Vinci’s day were twin aspects of creative thinking, have come closer together again.   For more click on: http://www.irishtimes.com/culture/culture-shock-the-best-artistic-stories-that-science-has-to-tell-1.2060226

Posted by stagebrace.com at 07:18 No comments: