SHUSH at The Abbey Theatre, Dublin

The scenographic interpretation and staged presentation is very straight forward in presenting a set that is an appropriate environment, addressing the needs of the script and the Director.


It is an efficient and effective design solution reflecting collaboration between the Director and Designer in supporting the light relief/sit com style of the play.


The play takes place at night and is set in an out-dated, 1980s middleclass two storied house in a mature estate. The tired interior is open plan, with an out of date sitting-dining room/kitchen space furnished with broken appliances, kitchen cupboards, drawer fronts, faulty refrigerator door, etc.


There is also a backdoor (stage left) from the kitchen to the exterior. 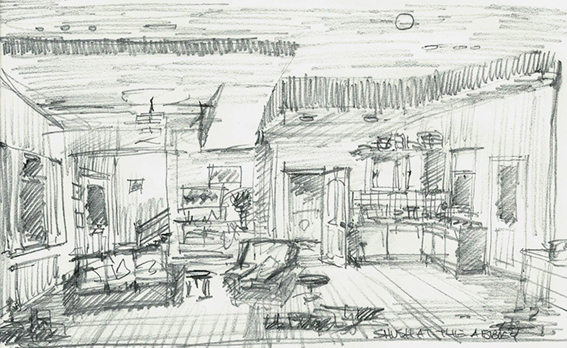 The psychological separation of the kitchen from the sitting room space is supported visually by a double-clad return coming a little distance downstage centre, under and alongside the bulkhead for the return on the staircase which protrudes through the stylised ceiling piece.
The Costume Design works well and looks the part in supporting the cast in playing their parts and giving presence and credibility to the author’s characters in time, place and social standing.
The Lighting Design made effective use of the vertical planes, ceiling pieces, depth of the set and the exterior outside the front door.
The Hair and Make-up Artist/Designer ably and convincingly supported the performers in their character with styled hair dos, kempt and unkempt hair as appropriate to the specific character at that time.
The special effects worked on que, looked convincing and appeared to stand up the robust action of the cast.
The one element that I have reservations about is the moodily lit night sky with moon and distant lights that spreads from wing to wing above the set. While this panoramic swipe of sky and lit dots gave the feeling of overlooking Dublin Bay it also subliminally dwarfed the action by representing the cosmos in which this miniscule, pitiful snip of human interaction takes place. Areas above the set and the action need careful consideration; if the area is distracting to the eye through being lighter in tone or of contrasting/different chrominance, it may intrude on the psychic of the audience member and adversely affect their theatrical experience.
The visual presentation of a brisk, humorous, wordy play as Shush with its crisp one-liner quips needs the visual support of the designers to encourage and settle the focus of the audience’s attention on the delivery of the characters dialogue and the performance of the cast.
The programme at €6 is good value, in that it includes short biographies on author, cast and crew and the script with stage directions. Some production companies provide useful content such as the Director’s view on the play, Author’s comments, and/or sketches by the designer(s) giving their insight into some of the thought process behind the concept development. Such input from the Designers is of immense value to students of Performance, of Design for Performance and of Design for Stage and Screen. Such content is to be encouraged and when provided, welcomed.


Students or those under 26 can join the Abbey Access All Areas for ten euro (€10)
See:

The scenographic interpretation and staged presentation worked a treat, the set, while being visually strong in making its statement; it was not intrusive but supported and anchored the space for the performance to take place in.


Collectively and individually the performances were charged with emotion, energy and radiance, they were spellbinding to witness and listen to. The concept of setting the story in "Occupied France" was novel (to me) and the splendid design solution starting with the unveiling of the set for act I, right through to the dramatic, heart breaking end of act IV was more than satisfying. The edgy, "Berliner Club" raunchiness of act III’s opening, with the menacing image of the Nazi logo hanging in the background was riveting.


The Lighting Designer’s contribution is immense in creating the appropriate visual ambiance and atmosphere and Alastair Kerr’s Lighting Design did so in this production through colouring the dramatic mood and tone of the moments in every scene and act.


Violetta’s dresses/costumes looked stunning and were worn with great elegance. Overall the costumes looked well; however some looked and appeared to wear as being of lighter fabric than the original garment might have been. For comfort of performance, this is understood but there appeared to be something distracting about the collar on Baron Duophol’s German Army Officer Uniform!


The collaboration with the RTE Concert Orchestra and the accommodation of an Orchestra Pit in the Gaiety makes an immense contribution to the balanced aural enjoyment of the music, vocals and instruments. And having said that, both the vocalists and the orchestra were of accord and sounded super.


I am looking forward to Lyric Opera’s adventure with Dvorák’s “Rusalka” at the Gaiety Theatre in September.


Drawings or Photos will be added to this blog soon.

Birdsong at The Gaiety Theatre, Dublin

On Friday evening last (31st May 2013) I attended a performance of Sebastian Faulks’s play Birdsong at The Gaiety Theatre, Dublin. The production is directed by Alastair Whatley, Set Designed by Victoria Spearing, Costume Design by Ed Holland, Lighting Design by Alex Wardle for (Charcoalablue LLP), Hair and Make-up Design was not credited.


The scenographic interpretation and staged presentation while being visually strong, appropriate, gritty, it is an effective and versatile design solution to addressing not only the needs of the script but also the needs of a touring production where the set has to have a flexibility fit the stage of the host theatres.


The collaboration between the Director and Designer is evidenced in the fast moving choreographed direction of the performers as they not only use the attributes of the set/performance space but as they set and strike the props and dressings.


The central performance space is tight evoking the claustrophobia of the trenches, tunnels and dugouts of the Western front.  The stage right wall of the set is depicted as the exterior ruined stone wall of a church with two gothic arches for access on and off stage. Up stage right had a ladder leading up to a parapet which formed a raised rostrum running across the back of the set with access to tunnels upstage right and left. A cut-out profile of debris, broken telegraph poles and beams supporting runs of unfurled barbed wire runs along the upstage edge of the parapet forming a ground-row against a stretched cyclorama cloth. The parapet runs off upstage left behind a balcony on the up stage left corner; the balcony is accessed by a door in the stage left flat. Down stage in the stage left flattage there is a large swinging panel which, when swung onstage represents the interior of a French country house, when swung off stage it provides and exit.


The Costume Design while being sympathetic to the characters, the period and the environment of the play they allowed for the many quick changes necessary to the performance.


The Lighting Design and the lighting changes were very supportive of the script and supported the psychological immersion of the audience into the performance, so much so that the counterpoint of explosions when they occurred accompanied by lighting flashes engendered the desired shock.


The dimly lit set is visible to the audience as they take their seats. The performance opens gently with the quiet arrival on stage of some of the characters and as a subtle light change lifts the darkness revealing the trench & tunnel entrance they add voice and music to the scene.


The play is scripted to open in or behind a trench in the Somme area on the western front during WWI. The set also incorporates other visual spaces for flashback scenes set before the war in 1910 in a French domestic interior and an outdoor picnic area in Amiens, an officers dugout, a café/bar, and the claustrophobic interior of the clammy, terrifying subterranean mine with the enemy trench in the fresh, birdsong filled air above it.


Victoria Spearing successfully amalgamates the interior-exterior, subterranean spaces and presents the set in a generic earth, muddy, camouflage pallet of appropriately gloomy colours with a rich texture of imbedded higgledy-piggledy bits of broken timbers, boxes, doors, trench ladder, bricks, etc. with the debris blending down and onto the painted sheeted stage covering. The design goes some distance in allowing for the seamless, smooth, unfolding of the play, in that it minimises the interruption of scene changes on the immersive engagement of the audience in the performance. The theatrical immersive engagement is supported by the smooth resetting of the furniture, dressing props and hand props by the in-character cast during the performance.


Alex Wardel’s lighting effects on the cyclorama cloth are well synchronised with Dominic Bilkey’s sound effects in accentuating the dramatic moments of attack, explosion and terror as much as the moments of quiet, birdsong, or of the dark, doom-laden oppressive silence  of the collapsed mine.


Costume Designer, Ed Holland’s costume concepts ably capture the images of the grime covered, hot, sweaty miners, the trench warfare dirt and grime on the military uniforms and the contrasting crisp, smartness of the same military uniforms when on parade. The 1910, French civilian and domestic characters are convincingly supported by the costume design.


The un-credited Hair and Make-up Artist/Designer ably and convincingly supported the performers in their character with unkempt hair, dirty grimy appearances, the smart, sharp look of the military and groomed look of the 1910, French civilian and domestic characters; all in all a visually consistent and convincing presentation.


The programme at a Fiver (€5) was good value, full of useful content such as the Writer’s thoughts on the adoption of his book for stage, an interview with Playwright Rachel Wagstaff, an informative account on the secrets of tunnel warfare during WWI, a WWI timeline from January 1914 to November 1918, A soldiers life in the trenches, short biographies on the artists, company and all concerned. All this material gives their insight into some of the thought process behind the concept development. Such input from the Writers, Playwrights, Director, Designers, etc. is of immense value to students of Performance, Design for Performance and Design for Stage and Screen and is to be encouraged and when provided, welcomed.