Our Few and Evil Days at The Abbey Theatre, Dublin

On Wednesday 1st of October last I attended a very edgy, gripping performance of “Our Few and Evil Days” at The Abbey Theatre in Dublin. The production was written by Mark O’Rowe(Howie the Rookie). Directed by Mark O’ Rowe, Set Designed by Paul Wills, Costume Design by Catherine Fay, Lighting Design by Paul Keogan, Hair and Make-up Design Val Sherlock.

This edgy, unsettling drama is set in a realistic domestic setting as prescribed by the script. It is presented as a front to back longitudinal section through the ground floor of a two story house, located in an affluent Dublin suburb. The main performance areas are the down stage right lounge/sitting room area and the down stage left dining/kitchen area of this open plan dwelling. The glass panelled door in the upstage glass panelled wall of the lounge/sitting room shows and opens into the hall and stairwell of the ground floor. This allows for action on the stairs and in the hall way to be seen by the audience. Down stage of this glass panelled wall is a foldout sofa-bed flanked by side tables and two armchairs.

Stage left accommodates a fitted kitchen with an upstage door opening into a utility room and access to the back garden and garage. Down stage right accommodates a dining table and four chairs. The configuration of the set allows for uninterrupted, fluid movement of action around the performance areas. The set is contained by a continuous, full ceiling piece with nine down lighters over the sitting room area and a chandelier over the dining table. The kitchen units have their own under lighting. 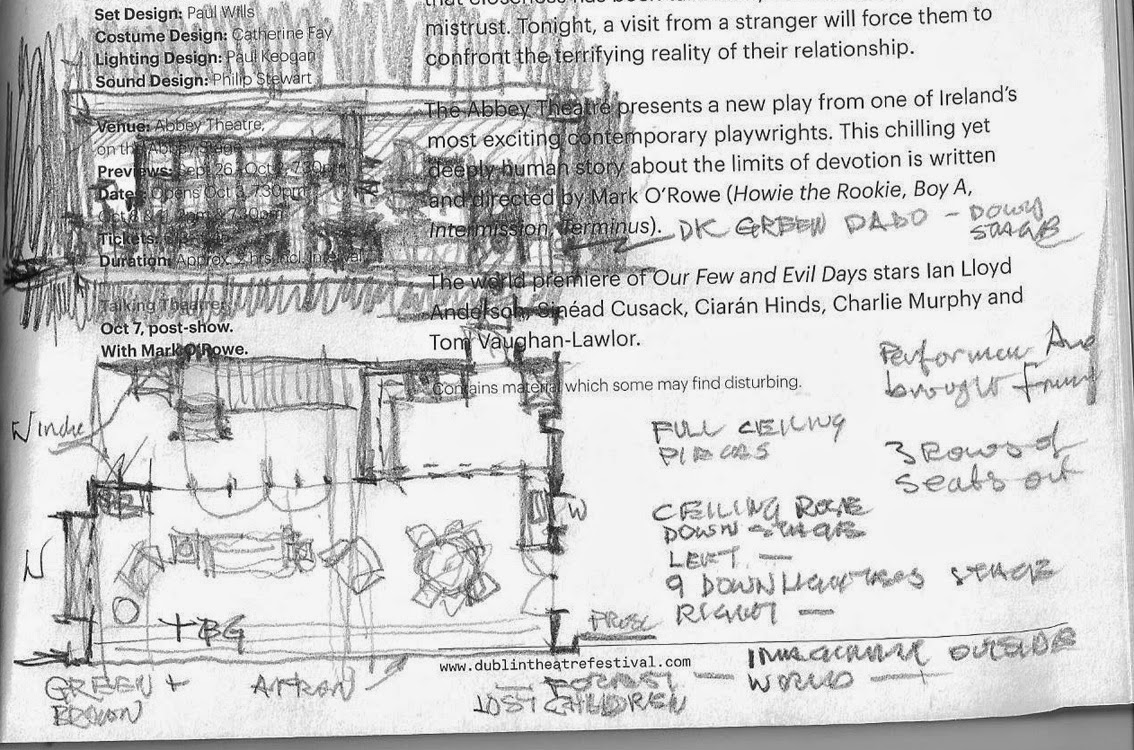 The whole stage area has been brought forward of the proscenium into the auditorium and gives the impression of being extended into the wings. The effect is to bring audience and performers into close quarter contact into a shared (at times white knuckled) theatrical experience.

The set is painted in tones of malachite to moss/racing green with all the woodwork (skirtings’ architraves, doors, windows) in varnished wood. In the context of the play this is an interesting psychological choice of décor on a number of accounts. Green is associated as a being a calming colour, popular in hospitals, schools, nursing homes, etc. It is also associated with sports, Billiard/Snooker Tables, Table Tennis Tables, Racing Green, etc. It also has summer woodland or dark evergreen forest associations, depending on the dramatic mood of the moment as augmented by Paul Keogan’s able lighting. Set against or in this “changing green ambiance” the characters simmer in social discourse and eventually explode in fissions of secrets told, frustration, anger, recrimination ending in haunting fusion of reconciliation.
The performance opens quietly at dawn with a sleeping wife/mother on the sofa bed in the down stage lounge/sitting room with the hall way and stairs in the background. It closes quietly, dimly at night with the same woman gone to sleep, dreaming in her sofa bed.

The programme at €6.00 (£9.99 in UK) apart from a short piece on the Abbey and biographies on the cast and crew, it is the script for the play containing a setting description, prologue and script with the writers stage directions.

Posted by stagebrace.com at 10:08 No comments:

On Wednesday 1st of October last I attended an edgy, gripping performance of “Spinning” at The Smock Alley Theatre in Dublin. The production was written by Deirdre Kinahan (Halcyon Days). Directed by Jim Culleton, Set Designed by Sabine Dargent, Costume Design by Leonore McDonagh, Lighting Design by Kevin Smith, Hair and Make-up Design not credited

This edgy, unsettling drama is set on a symbolic, isolated, raised tidal island in a dark, spacious limbo observed by darkened audience from three sides. Anticipation stirs as the house lights darken and the characters brighten through the gloom, revealed on a raised, hard, weathered copper surface, the edges encrusted with exposed low-tide marine molluscs.

Sabine Dargent presents the performance space as a two tiered low raised flat topped irregular shaped rostrums. They appear to be topped in sections of weathered copper or brass sheeting which gives a slightly reflective patina and muted hardness to the surface. The rostra facia is textured as low-tide exposed rock or harbour wall, encrusted with molluscs and fragments of marine detritus. The undercut facia is under-lit, which is used sparingly to dramatic effect. The rostrum levels a texturally welded to the level below by a rim of encrusted molluscs, grit and fragments of marine detritus. Has the tide has gone out for Conor?

The timely lit performance areas within the space and the smooth queuing of the performers bring the audience effortlessly from setting to setting and from time to time.

The centre stage performance space is anchored by a small round metal, glass topped table and two chairs with character.

Overall presentation is visually pleasing and appropriate to the drama; the scenic elements are economically skeletal and effective. The backing of black drapes an partially lit back wall of the theatre gave a subdued starkness to the space. This assisted in confining the observer’s attention on the performers, an effect which was supported by Kevin Smith’s lighting.

As the drama unfolds the encroaching mental and physical deterioration of Conor was convincingly supported by his unchanging attire, symbolising his inability to change. This in contrast to the costume changes reflecting the growing confidence and assertiveness of Conor’s estranged wife.

The Lighting Design was subtle and sensitive in conveying changes of location, time and bringing emphasis to dramatic moments.
Overall a contained, dramatically claustrophobic setting in which this edgy, unsettling drama unfolds.

The programme was good value at €5.00 apart from information on Fishamble, biographies on the cast and crew it contained the script with the writers stage directions.